Today’s piece of artwork is a soft block carving which has been printed then scanned into Photoshop and colorized using a variety of layers, brushes and enhancement tools including such different channel modes as Color, Darken, Lighten, Multiply.
It’s a different version of the same dragon (scroll down) which I painted in my Moleskine last Friday for the first day of Chinese New Year.
I think it might make a cool T-shirt, too! I know, I said I was going to do something botanical. And then I went and painted something dogical.
Just don’t tell Ripley that I drew someone else. She will be so jealous.
If I go to a friend’s house and play with their dog she is ALL OVER me with questions when I come home.
Who were you with? What did he look like (yes, dogs know if it was a he or a she)
Did you give him a treat? Did you bring one for me?

Tech stuff:
Watercolor and colored pencil (both watersoluble kind and waxy kind) on Stonehenge paper. The underlying watercolor was painted with a squirrel mop. Some Photoshopping to clean up ragged edges and correct color and values.

I guess I better not leave that squirrel mop within reach of you-know-who or I’ll have to go looking for it in the doghouse. I just got back from a meeting of the So. Calif. Guild of Botanical Artists, which is held every three months in and around the southland area. What an incredibly nice (and talented) group of people! I am still evaluating whether or not I have room in my life for another membership or commitment, but if I do this would be high on my list. During this period of exploring and experimenting as I return to art after my long hiatus, I am looking at many different forms and expressions. Botanical illustration is among the most rigorous as every detail must be technically accurate as well as beautiful. Some artists draw their subjects many times, defining and refining it on tracing paper until they get the details perfect. At that point, they will transfer it to paper (watercolor paper or bristol board or another type, depending upon the medium used.) Then begins the detailed application of paint or pencil. I’m not sure that I will have the patience for that kind of exacting work, but as some of the members mentioned, some people do accurate paintings in a much looser style. On the other hand, I love flowers and gardening so much … AND … I love watercolor and other media so it makes a lot of sense that I’d be attracted to botanicals – it would unite two of my passions. So, we shall see. I don’t have any tightly rendered botanicals to share today, although I think I may try to render something small in the next few days, just to see what it “feels” like. In the meantime, here’s a field study of some tree roots, painted last year in the Angeles Forest. Click to enlarge
I don’t usually participate in Photo Friday, but this week’s theme of “pink” fit with a picture I already had on hand, taken in 2004. I can hardly wait until these lovelies bloom again this year. It is a tulip magnolia and I found this one growing at a house in Pasadena. I stood on the sidewalk and just shot like mad, hoping that the homeowner wouldn’t mind. I was intending them as reference photos to paint from, which I’m still going to do – and maybe quite soon. 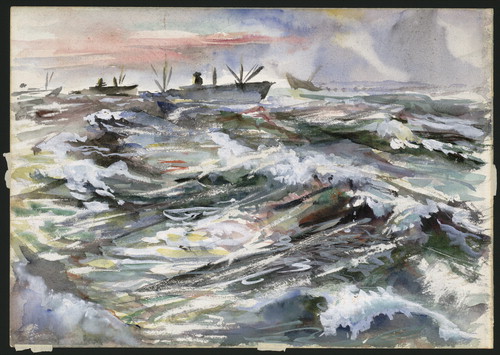 If you’re like me, there’s nothing more interesting than peeking inside someone else’s journal or travel diary to see life through their eyes at a particular time and place. That’s why I’ve been getting so much enjoyment from Tracy Sugarman’s drawings and watercolors from the Library of Congress “Experiencing War” Veteran’s History Project, documented by the US Library of Congress.

You’ll find 85 drawings and paintings at that address which portray life in the Navy before, during and after D-Day. You’re going to want to spend some time there, and the pictures can be enlarged quite a bit to see detail. Sugarman served for three years and I believe he is still living as the website shows no date of death.

This one is particularly interesting because you can see how he did his underdrawing before applying paint. Another watercolor exploration painted from two different source pictures, which I shot. Although the little girl was very lively, she was quite careful with the small animals. The scene reminded me of the gentleness we are all born with, and which always lies within us, no matter how old we may be.